Seven DELTA staff members received Pride of the Wolfpack awards at a staff meeting held Friday, August 26, 2016. Dr. Tom Miller presented the awards to recipients who continue to make an impact at DELTA with their special and unique contributions. The recipients were honored with framed certificates and lapel pins for their hard work and dedication. The 2016 Pride of the Wolfpack award recipients are Steve Bader, Julie Bunting, Brad Collins, Nicole Hazelett, Bethanne Tobey, David Tredwell and Merranie Zellweger. 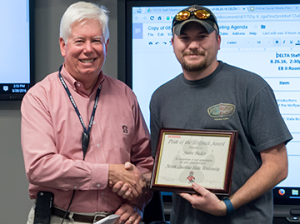 According to Senior Associate Director – Applications Development Jeff Webster, “Bader deserves this recognition for his willingness to take on and succeed at projects outside of his usual experiences.” His third DELTA Grant, GIS 540 Py4All, was a source of many instructional design challenges, but Bader continued his work in pursuit of creating a project that is easy for students to use. His coworkers saw firsthand his dedication to DELTA’s mission when he asked to be on the specific project because it was going to be a beneficial tool for students. 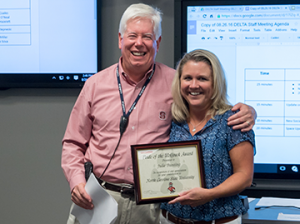 Bunting is an outstanding employee and a viable member of the DELTA and Academic Outreach & Entrepreneurship (AOE) team as she is the Senior Accounting Specialist for DELTA and assists with AOE business services. A member of DELTA since April 2015, Bunting has been asked to take on a variety of roles this year, and she has not only successfully completed her duties and major projects but been productive and effective under pressure. Bunting’s boss Assistant Vice Provost for Business Operations Jessie Sova, said, “Because of Julie’s efforts and successes, our Finance and Business Office’s reputation is second to none.” While presenting, Miller agreed and added, “Julie doesn’t let anything fall through the cracks; she is very awesome!” 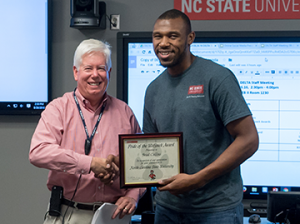 As an integral part of the DELTA testing team, Collins demonstrates initiative and enthusiasm in his everyday work. Since joining DELTA in 2014, Collins has helped to maintain a positive environment for students and colleagues, especially during peak testing times when issues arise. Collins readily identifies and addresses the problems, and finds resolutions that ensure continued student and faculty confidence in DELTA Testing Services. Proctoring and answering hundreds of emails are just some of Collins’ responsibilities, but he also goes beyond his daily duties to implement more efficient processes within DELTA Testing Services. Collins strongly supports DELTA’s strategic plan, and he ensures the mission of helping faculty build student success. According to Director–Distance Education Administrative Services Melissa Williford, “His many talents and contributions to the overall success of DELTA Testing Services are commendable; he sets a high standard for integrity and respect.” 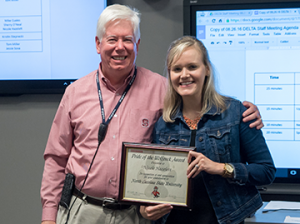 DELTA colleagues and partners often request Hazelett’s presence on various brand, communication and marketing pieces because of her excellent customer service and clever designs. Hazelett is recognized as someone who takes initiative and completes projects on time or ahead of deadlines. Her consideration of the NC State brand in all of her endeavors is just a small reason she received the Pride of the Wolfpack Award. Hazelett has designed items from pens to the large screen displays in Hunt Library. Hazelett takes a forward thinking approach to her design work and is always willing to help all DELTA units and teams when needed. 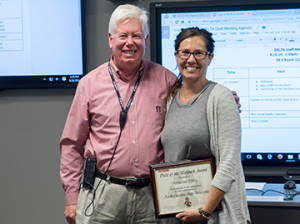 As a member of DELTA since 2014, Tobey has worked on numerous projects that utilized her organizational talents, problem-solving skills and positive attitude. Most recently, Tobey, along with other team members, effectively created the agenda and led a DELTA Grants Orientation to improve on last year’s orientation. Tobey has worked to create a 15% increase in average attendance at the Instructional Designer Interest Group, a group of instructional designers, faculty and students that share new knowledge in pedagogy and technology. She also helped create VRIG, another interest group to increase communication among people working on virtual reality projects to increase efficiency. Assistant Director for IIS Daniel Davis, noted Tobey’s encouraging attitude, hard work and willingness to take initiative and said, “She exudes the values of DELTA and the university.” 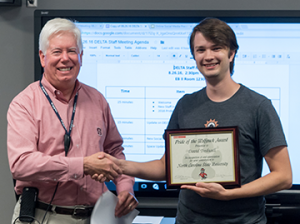 In his role as a multimedia specialist, Tredwell’s expertise has contributed to many successful projects at DELTA including one he led, MyTech App. The MyTech application allows students in physics labs to turn their smartphones into a robust piece of data collection equipment. It explores and analyzes raw data from the phone’s internal sensors. This project is an example of how Tredwell always seeks new experiences and ways of thinking. His insightful nature allows him to utilize his team member’s strengths to complete a task. His coworkers feel he embodies everything that DELTA represents. “He is intuitive, aware and calculated,” said colleague Bethanne Tobey. 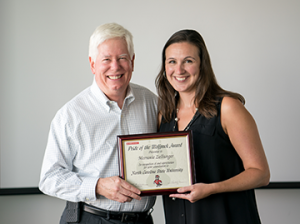 Zellweger is a “gifted people manager” according to other DELTA staff members. They agree that successful project management first begins with a great project manager such as Zellweger. She makes sure everyone in a project collaborates with one another and ensures any potential problems are solved. Zellweger is patient and dedicated, and a very deserving recipient of the Pride of the Wolfpack award. According to her coworkers, Alexis Simison and Samantha McCuen, “Transparency, collaboration, innovation, and successful communication, just a few of DELTA’s values, are always prominent in her approach to project coordination.”

Remote Teaching and Assessment: Some Considerations and Concerns for Exam Monitoring and Online Testing

As we’ve embarked on an unprecedented journey to quickly pivot our campus classes into remote learning experiences, many questions have arisen (and continue to arise) about how to ensure the integrity of our academic environment. Read these considerations and concerns for exam monitoring and online testing.

There have been a number of concerns in our community about the access, security and privacy of using Zoom on campus. Read more about how Zoom is proactively addressing concerns.