The year 2022 has seen some major enhancements to the Breakout Room feature in Zoom. Check out the new features below. See if these new capabilities will make it even easier for you to increase student engagement in Zoom breakout rooms, and foster deeper discussion during breakout room sessions. NOTE: All NC State zoom desktop client users will be required to update to version 5.10.3 before the Fall semester begins, and that update will enable faculty, staff, and students to take advantage of these new features. 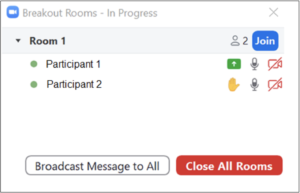 Have you ever wondered what is actually happening in each breakout room during your class? Sure, you can join each room to check in on your meeting participants, but this can be disruptive to their discussion. Another strategy is to have each group collaborate on a digital document or whiteboard that you can monitor while they discuss.

Zoom has added a new, built-in way to simply see who’s active and who’s not in a breakout room. When hosts and co-hosts view the breakout room window (pictured at right), they will see each participant’s video and audio status, if they are sharing their screen, and any active reactions or non-verbal feedback. In the example shown, for instance, Participant 1 is sharing their screen and is unmuted, while participant 2 is also unmuted and has their hand raised. Read more in the Zoom support article on Managing Breakout Rooms, under the heading “Viewing activity statuses of participants in breakout rooms.”

In a large class with lots of breakout rooms or many participants per room, you may have wished that you could easily find one person. Maybe you want to move them to another room, or just figure out which group they are in. With new updates, hosts and co-hosts have the ability to search participants or breakout rooms by name.

Do you use the same breakout room configuration in multiple occurrences of a meeting? Now you can save breakout rooms you create for use in future sessions of that recurring meeting. This is an alternative to the pre-assign feature, which is another way to use a configuration multiple times without having to remake it. Read more in the Zoom support article on Managing Breakout Rooms, under the heading “Saving current breakout room assignments for future use.”

Choose Whether to Assign Co-Hosts to Breakout Rooms

In the past, co-hosts were included in breakout rooms if they were created automatically, but that is no longer the default. You can decide whether to include them or not. Read more in the Zoom support article on Managing Breakout Rooms, under the heading “How to create breakout rooms.”

You no longer need to close your breakout rooms to rename or add/remove additional rooms. This can reduce interruptions and distractions for breakout room participants if you need to adjust on the fly. The breakout rooms window now shows the options to “Rename,” “Add Room” and “Delete Room” (available only for empty rooms). Read more in the Zoom support article on Managing Breakout Rooms, under the heading “Managing breakout rooms in progress.”

Hosts and co-hosts can share their screen and/or audio to open breakout rooms from the main session. You might use this to share tasks or other information. The option to “share to breakout rooms” will appear at the bottom of the share window when breakout rooms are in progress. You can also click the “Share Sound” option if you’d like to include audio with your content. Read more in the Zoom support article on Managing Breakout Rooms, under the heading “Sharing your screen to all breakout rooms.”

These new features are beneficial for instructors because they make the management of breakout rooms more seamless, allowing for a more smooth-running class. For students, they have the potential to create less interruptions to learning as less time will be lost managing the logistics of breakout rooms. Want more tips for using breakout rooms? Read DELTA’s Teaching Resources page on “Using Breakout Rooms in Zoom.”