David Howard and Donna Petherbridge attended the Campus Technology Conference at the Hynes Convention Center in Boston August 1 – 4, 2016. Met there by Joshua Gira from NC State’s College of Natural Resources, they enjoyed having a chance to spend some time with a colleague.

Start planning for next year’s conference, which is in Chicago!

David & Donna would recommend this conference to those who would benefit from finding out more about both online and in-class educational technologies and their uses in a conference setting with fewer attendees than a large conference such as EDUCAUSE attracts, but with a broader attendee base than a localized conference such as UNC CAUSE. The vendor floor is very good with a variety of technologies to consider (including many classroom technologies), and the range of presentations includes options for those interested in the more infrastructure/technical aspects of educational technology as well as those who want the practical educational applications of technology.

A few highlights from Donna:

Learned about a few useful extensions for Chrome including Shorten Me!, Fireshot lite, and Print My Cal in a preconference workshop with Mark Frydenberg from Bentley University. The focus was primarily on using and extending Google apps with other tips and tricks included.

Did some strategic thinking with Bryan Alexander in the Assessing Emerging Technology and Futures Capacity for Your Organization preconference workshop. Bryan works with the New Media Consortium and contributes to the Horizon report, and he also has a monthly report called Future Trends and Technology in Higher Education (read this each month if you are in the ed tech area!).

Learned about the Massachusetts Green High-Performance Computing Center as an incredible partnership that supports the data center needs of five private institutions.

The Wearable Technology Innovations session really made me think about all of the data that these devices “know” about us, and the implications for the privacy and ownership of that data. Really, who is entitled to know about my heart rate and physical activity via my FitBit or other wearable device.

Wearable Technology is well-integrated at this point into the consumer market, starting with babies (just take a look at the Connected Baby at Target — my first rubber ducky was not as cool as Edwin the Duck). Who needs emergency phones on campus — perhaps all of our students could simply be issued emergency jewelry. And beyond the Fitbit, Samsung’s S-Patch will let me (and who knows who else?) know all about my body fat index. This is all cool stuff — though being mindful of where and how the data is used is something to think about.

A few highlights from David:

Learned about Bartle’s taxonomy of gamer types from Scott Reinke in a preconference workshop. Players are rated on two scales: whether they want to interact with the world or with other players and whether they want to ‘act’ or ‘interact.’ We discussed how building a game or game mode that appeals to some types of gamers can be a disincentive to others. There was a strong recommendation for the book Gamify by Brian Burke.

Another preconference workshop on virtual reality highlighted the fact that NC State is doing great things in this area already! See recent articles in DELTA News about virtual reality

A session on using data to understand student behaviors made me think a lot about how we could use data from a classroom response system to gather information about what students are doing and how those behaviors are related to performance. The presenter uses Echo360 which gives information about student note-taking, review and performance on in-class quizzes.

Learned more about lightboards from folks who had built one for their department. They shared stories about troubleshooting the setup and the kinds of videos that instructors made.

In addition to some of our individual takeaways, there were additional items of note that we took away from shared general/keynote sessions and/or reoccurring themes. These include:

Questions? Comments? Contact either of us and we’ll be glad to share our experiences and provide additional details for anything you might find interesting (pether@ncsu.edu or dlhoward@ncsu.edu) 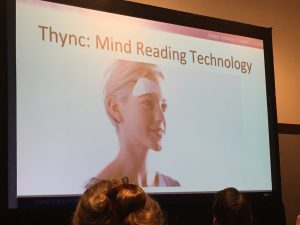 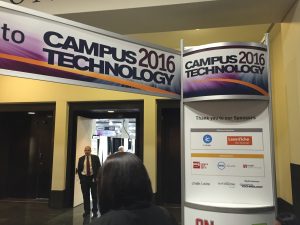 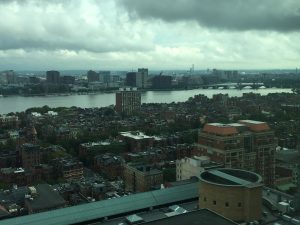 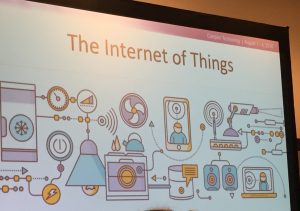 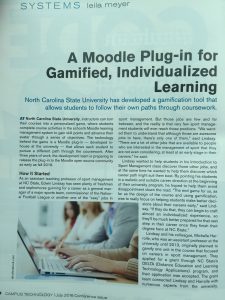