If you’ve ever been to DELTA’s Venture II office on Centennial Campus, walking off the elevator, you’ve inevitably noticed an illuminated aluminum NC State University “brick” welcoming you to the space. What you might not have noticed is the small sign next to it that reads “Designed by Trent Huffines, Student Designer.” 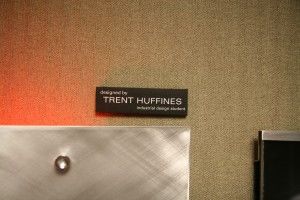 You certainly will not notice the countless hours of time spent calculating curvatures, welding and powder-coating metal plates, manually laser-cutting lettering, and sanding down the metal finish. Or, behind the sign: the brackets, LED lights, nuts, bolts, screws, Plexiglass, and bracketing that hold it all together.

Industrial Design senior and DELTA intern Trent Huffines knows the ins and outs of this “brick,” as well as many other designs around DELTA’s Venture II space. Huffines is also a part-time supervisor at the College of Design Materials Laboratory, which gives him access to industrial design tools and materials.

Huffines is one of ten to twelve multimedia student interns DELTA’s Creative and Multimedia Production Services team employs at any given time, who design signs, graphics, websites, animations,  iPhone games, and more.

Huffines’ supervisor is DELTA Media Specialist Patrick Odom, who provides direction and support throughout Huffines’ internship. DELTA’s internship program gives students real-world experience that they otherwise may not get in the classroom.

“Class is like being off in ‘Idealand’. We may be doing something like designing a futuristic concept or new vehicles,” Huffines said. “At DELTA, it’s like putting theory into practice, more in a real-world sense. DELTA has provided me a grounding element: taught me that ideas are great, but making those ideas into final products that are manufactured is completely different.”

When Huffines started with DELTA in spring 2009, he started by creating industrial designs from simple ideas, such as the signs hanging in the testing rooms numbering workstations. Since then, Huffines’ designs have increased in scale and complexity as he has had his hands (literally) on much of DELTA’s space.

“Working for DELTA has been an invaluable experience and has gotten me involved in ‘infographics’, or signage: graphics and industrial design together.”

“I provided the art direction to help give him a jump-start on the project and then the concepts would start rolling in,” Odom said. “Trent has learned how to work within a budget, but build things that are aesthetically appealing to all involved.”

The “brick” and the hanging dividers in the DELTA lobby, two of the first things anyone sees when they walk into DELTA’s Venture II office, have been especially successful.

“When I got the aluminum, which is aircraft-grade metal, it was taller than the proportions for the space,” Huffines said. “So I ran the metal through the table saw, sparks flying everywhere, to cut it down to the right size, and the finish was achieved by scratching the surface with sandpaper.”

“The ‘brick’ was a unique challenge because the wall behind it is badly scarred from the previous tenants, so my design had to hide those scars,” Huffines said. “[The brick] was very important in that once anyone, a student, faculty, the chancellor, or anyone exits the elevator onto the DELTA floor, my sign is the first thing they see. So the aesthetic of my sign will immediately begin dictating the feeling they have of DELTA.”

Not only is the sign professionally made, but it also kept costs low having a student intern design and construct the sign versus outsourcing the job.

Unable to create a permanent wall, Huffines determined that placing three hanging dividers between the desks where students study and the conference room windows was the best solution.

Hanging by two steel rods each, Huffines manufactured grooves and threads into a cut, solid rod for screws to hold two pieces of transparent acrylic flat against each other. Between the two pieces of acrylic, Huffines inserted curved metallic inserts that match a honeycomb pattern found elsewhere in the lobby.

“I made it something that can transform as DELTA transforms, the two pieces of acrylic together, allowing designs to be put in between them,” Huffines said. “So when I leave, the dividers can change styles and logos easily. They’re like a picture frame, not a permanent wall.”

“I had to work with the infrastructure of the building, not like signs or graphics. I had to get in the ceiling and figure out what is going on in the building itself. I also had to comply with the building manager, the fire code; all to make sure what I was doing was legitimate.”

Until Huffines graduates in May, DELTA already has him working on a few more projects. Huffines’ upcoming work includes creating even more signage for DELTA’s space such as: Testing Services’ space in Cox Hall, Video Communication Services’ spaces in Ricks Hall and Park Shops, and Instructional Support Services’ space in D.H. Hill Library.

“Trent’s passion and eye for detail really stand out. He is always trying to make something better,” Odom said. “His ability to take an idea from paper to prototype and then to a final piece is just amazing.  What he has chosen to do with branding in our front lobby entrance and testing services impacts not only the DELTA employees, but all guests who visit our space.”

Coming from a family that has been in the furniture business for four generations, Huffines has always enjoyed working with his hands. Huffines’ talents can be used in many design fields: his aspirations include designing furniture, running his own design company, or even industrial-design work for the armed forces. Huffines’ grandfather, who has had a profound impact on Huffines’ life, served in the Korean War, an example of how Huffines’ work has always had ties back to his family.

“[They] don’t seem to relate, but I don’t have to just enlist [in the military]. I can design products or design ways for soldiers to deal with situations that saves lives or makes the country a safer place.” Huffines said.

Remote Teaching and Assessment: Some Considerations and Concerns for Exam Monitoring and Online Testing

As we’ve embarked on an unprecedented journey to quickly pivot our campus classes into remote learning experiences, many questions have arisen (and continue to arise) about how to ensure the integrity of our academic environment. Read these considerations and concerns for exam monitoring and online testing.

There have been a number of concerns in our community about the access, security and privacy of using Zoom on campus. Read more about how Zoom is proactively addressing concerns.