In ARE 306: Agriculture Business Law, Dr. Ron Campbell adds drama to his subject matter through a series of mock court featurettes. In the article that follows, Dr. Campbell describes the featurettes, their production, and their benefit to student learning.

How best to stimulate learning about any subject? Take DE students to the field and encourage hands-on learning. Students studying law decided to create court cases where they were the litigants.

The Case of the Lost Laptop was the first in a trio of video mock court featurettes. This case, set in Small Claims Court, dealt with a student finding a laptop computer, turning it in to the rightful owner, and collecting the reward. Only she never was paid any of the money promised in the reward poster. The owner’s roommate claimed that the student who found the laptop was present near the library tables when dozens of laptops had been stolen during the year. The plaintiff was the thief!

This case had students playing the judge, the litigants, the bailiff, the police officer, and all courtroom roles. The courtroom was created on campus in an oak paneled room in the student center. See the video at http://mediasite.online.ncsu.edu/online/Viewer/?pei d=1356cd7e4fd94a379f9f397579f67f071d. 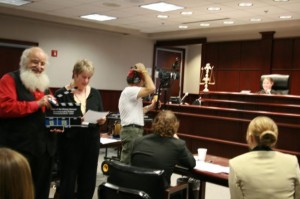 For The Case of the Sleazy Spouse the co-producers took the students to a real court room available because the state judges were at an annual conference. The final video may be seen at: http://mediasite.online.ncsu.edu/online/Viewer/?pei d=55aea95f9c0742388d4949d4c87242651d.

The Case of the Devastating Drunk involved filming a flashback auto accident scene with the campus police and the county EMS ambulance.  The final video may be seen at: http://mediasite.online.ncsu.edu/online/Viewer/?peid=eea15f7a4e404b79b25b0a6eccb020231d.

These three videos are now part of the DE Agricultural Business Law course. Students e-mail their analysis of the case to the instructor. DELTA’s hands-on learning and mobile productions enhance student involvement.

One response on “DELTA on location”

Pack Hacks for Faculty: Compassion and Understanding in Online Teaching and Learning

This month, Angie Smith, associate teaching professor in the Department of Educational Leadership, Policy and Human Development in the College of Education, provides insight into adjusting to online teaching and learning during the COVID-19 pandemic.