Dr. Martin Dulberg, Jeff Webster, David Howard, Greg Kraus, Jonathan Champ and I represented DELTA at the Moodle Moot (and Sloan-C) in sunny Orlando, Florida at the end of October. Because travel restrictions were part of DELTA’s budget cuts, we drove to Orlando in two cars and stayed at a donated timeshare property about three miles from the conference hotel. The moot was also attended by James Bossert from CALS. Also, Dr. Bill Randall from the NC Community College System was a keynote speaker, and Dr. Garvey Pike and John Champion from UNCC were there. North Carolina was well represented.

Before the conference kickoff reception on Wednesday, we had some free time, so I arranged a meeting with Dr. Michael Macedonia of Fronterra Systems, a leader in virtual worlds software development. Four of us went to Forterra’s headquarters and saw a demo of their On-Line Interactive Virtual Environment (OLIVE) enterprise virtual world product. They are doing some very interesting things with it, including virtual crisis command and control centers and a lot of work for homeland security. Mike is a colleague and personal friend, and he agreed to show us their products for our academic interest.

Thursday was a busy day with the following presentations:

What LMS Selection Committees Should Know

A roundtable will discuss issues that LMS selection committee members face while examining alternatives to Blackboard. Robert, John and Lou will explain what prompted their schools to select the open source Moodle LMS, and how faculty “buy-in” for a switch in the schools’ LMS platform was obtained. 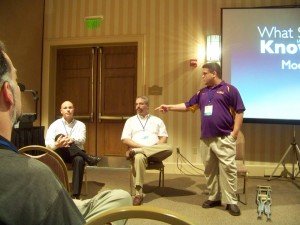 This session, more a panel, really, was an opportunity to share our three stories of how our campuses decided on Moodle. There was a large crowd, and it was a highly interactive session, many questions from the audience, many comments. Surprising turn out and participation for a session at 8 am.

This session will feature speakers discussing one of the biggest strengths of an open source LMS: the ability to access source code. Robert will demonstrate how LSU has worked to modify Moodle core, including customizations to the Grade book. Jeff will discuss NC State’s early adoption strategy and plans for integration between Moodle and other elements in the learning stack. Anthony will discuss how Moodle core and contributed code is maintained in CVS, and how organizations can become active developers within the Moodle.org community.

Jeff represented us well in another panel session about managing access to the source code, and integration of Moodle. Unfortunately, it was at the same time as the following two sessions, also by NC State folks, so we were unable to attend. Perhaps Jeff will post a comment telling us about the talk.

Free like puppies not like beer: Our journey from a commercial LMS to an open learning environment.

The idea of a “free” Learning Management System may be quite compelling to campuses interested in reducing costs; however, it’s not that simple. Learn how NC State University is moving to Moodle as an open source solution where resources are redirected to give our campus flexibility and control. If there are other institutions interested in very similar open source LMS topics for a panel discussion, we would be interested in participating in that in lieu of, or in addition to, a lecture-style presentation, if appropriate. 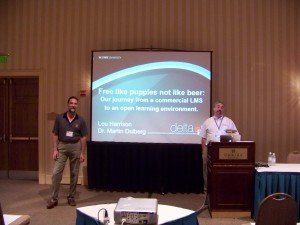 Marty and I gave our talk about our journey from a commercial to an open LMS. This talk was much more detailed than the 8am panel session, and we covered everything from DELTA’s organization, through our current LMS governance structure. There was a large audience, and they were highly engaged in the conversation. We also heard short versions of other people’s stories. The big take away for me is that even though we are all different, there are a lot of similarities too, and most places go through a similar process as we did. Some take longer, some less time, but all are very similar, and depend on buy in from the campus community.

Instructional Support Services at NC State University offers a wide spectrum of faculty support services, including a learning technology Help Desk, instructional housecalls, workshops, and collaborative course development. Since 2008 we have been using these services to evaluate Moodle and then plan for migration of instructors from Blackboard Vista to Moodle.

David and Greg also gave a talk at the same time. Since it overlapped with my other talk, I did not attend, but understand they had a lively discussion. Maybe they’ll comment and fill in the details.

Friday, there was only one talk, a Sloan-C Featured session:

The Open Source in the Enterprise: The process of selecting Moodle as a Learning Management System

This panel will explore the process of moving to Moodle, an open source learning management system. The panel will present their experiences with Moodle and the incorporation of high profile Open Source products into the university setting. Discussion will include hosting issues, security concerns, FERPA compliance, Moodle customization, pedagogical principals, faculty training, implementation and ongoing expense, and the politics of adopting a new Learning Management System.

This session was basically a similar session to the Thursday 8am session, except the audience was Sloan-C participants, not Moodle Moot participants. Either the Sloan-C folks were out too late Thursday night, or this topic wasn’t a high priority for them, because the audience was much smaller than the talk the day before, and the audience was not nearly as interactive. They did ask some questions toward the end, but not nearly as many as the moot session. All in all, it was still well received, just by fewer people.

The sessions ended around lunchtime on Friday, and we spent the day Saturday driving back to Raleigh.

The 2021-2022 DELTA Annual Report is now available online! Explore the report to see the progress we have made toward our strategic goals and positively impact student success.

Engage students in your course content and help them succeed with interactive videos. PlayPosit is a digital tool that is integrated into Moodle that instructors can use to make video content more active and engaging.